New, more sensitive, and precise testing reveals a troubling finding in the treatment of Lyme disease. As this study reveals, many doctors may often be prescribing the incorrect antibiotics, due to the narrow focus on B. burgdorferi. In twenty-seven people from sixteen states, 96% were found to have other Borrelia strains than B. burgdorferi, many of which cannot be treated with the same antibiotics.

Treatment-resistant, chronic and apparent relapsing Lyme disease (borreliosis), with its oft associated co-infections which worsen the illness, though once debated, is now well-documented in the scientific literature. Chronic Lyme disease has reached the true status of a global pandemic, though largely unappreciated by the media and mainstream medicine.

Conventional iagnostic lab testing, such as Western Blot, ELISA, and Conventional Bacteria PCR testing for the dectectin of Borrelia spirochete of Lyme disease has had limited success. Most types of conventional tests having high false-negative results, with as little as 30% sensitivity, meaning as much as 70% of people tested, actually have the infection, but never get treatment due to their lab test coming back negative. These people fall between the cracks of medicine as their body and lives fall apart as doctors do not know what is wrong with them, assuming the tests were correct. (See Fig. 1) 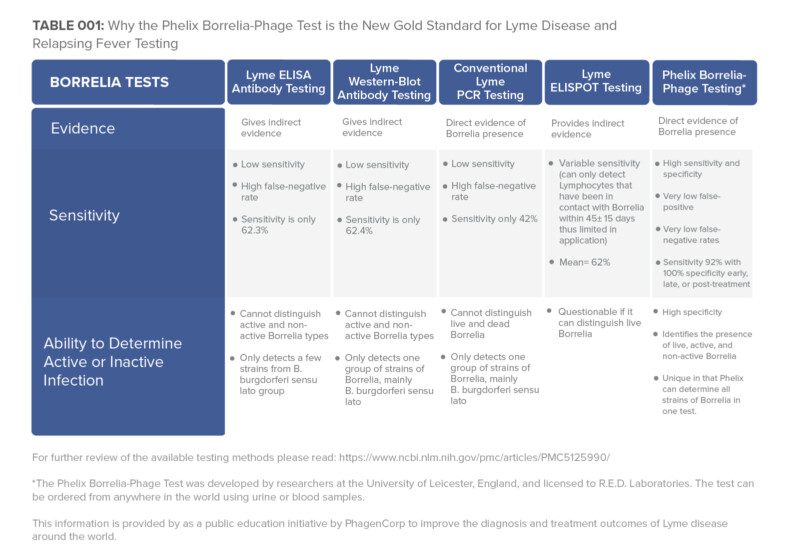 The painful reality is that conventional labs which are not focused solely on testing for Lyme disease, often are not as diligent in their testing, not getting paid more to find the bacteria or not, and seeming to forget that there is a real and desperate person at the other end of the blood test. Unfortunately beyond this, the medico-political environment regarding the existence of chronic Lyme disease also gets in the way of getting many, if not most conventional physicians to order the test, even at the pleading of their patients.

In 2019 a new, highly sensitive test (See Fig. 1 Phage Test) was developed by the University of Leicester, in England, and performed by the R.E.D Laboratory, for the diagnosis of Borrelia infections. This test is so sensitive and the testing process so rigorous, that the test is nearing 100% accurate, at >80% sensitivity to detecting not just the presence of Borrelia burgdorferi, but all of the 20 types of Borrelia that can cause tick-borne and vector-borne illness. This test is call the Phelix Borrelia-Phage Test, and is such a breath of fresh air in that the test results come back not with encrypted, hard to determine bands, as in Lyme Western Blot tests, but instead clearly state, Positive or Negative and the exact type of Borrelia infection or multiple types of Borrelia strains that you have, without needing your doctor to interpret the results. Doctors in the United States or any other country can order this test.

Testing from Many Regions and States in the U.S.

The world is a much smaller place than many appreciate. It is commonly, although mistakenly thought that some of the twenty Borrelia bacteria strains are only in Europe, or only in Asia, or only in certain regions of the U.S. As this study demonstrates, only one person had B. burgdorferi in the group of 27 people in this study.

Armed with the newest and most sensitive Borrelia test, we undertook a retrospective study of 27 people from 16 different states (see Fig. 2) to achieve a wide view of what types of Borrelia infections people actually had in the different parts of the country. The results were unexpected, as the graphs and figures in this article demonstrate. The pre-study expectation was that people with chronic Lyme disease, especially in the U.S., would be infected with Borrelia burgdorferi. 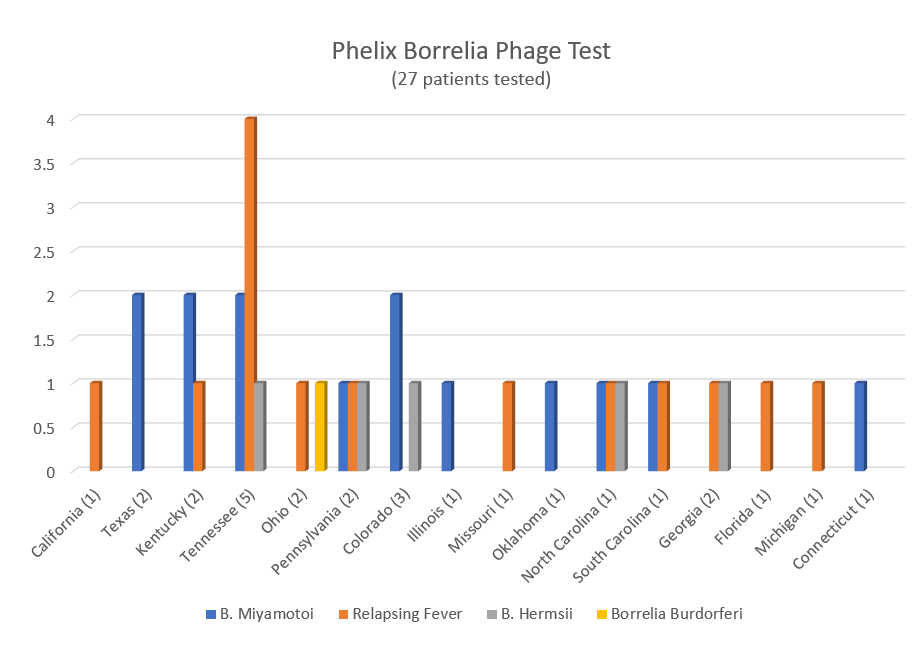 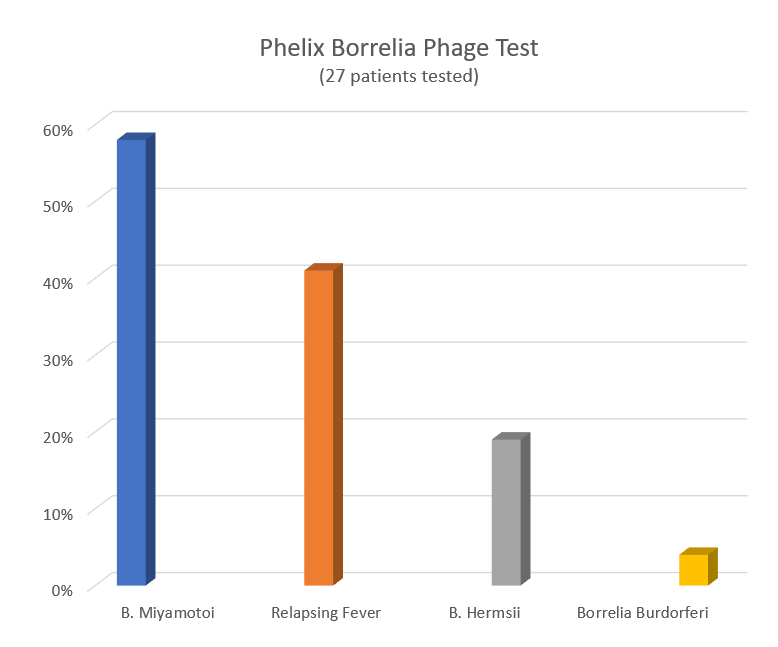 The implications of this review are that Borrelia burgdorferi is likely not the primary culprit in many cases of chronic Lyme disease in the United States, as was previously thought. The other huge takeaway from this study is that many if not most people are not receiving the correct treatment, since the antibiotics typically used for B. burgdorferi are not the same as those used for other strains of Borrelia.

The specific strain of Borrelia bacteria cannot reliably be determined using bands on a Western Blot test. Any lab test that is focusing only upon B. burgdorferi, will miss the true diagnosis of other strains of Borrelia.

The Phelix Borrelia-Phage test is just one of a new breed of phage-based lab tests that will likely become the gold-standard of all bacterial testing. It would be advisable for anyone who suspects that they have or had Lyme disease, yet have either been told they are negative, or who have lingering symptoms to be tested again with the Phelix test.

Our view of what symptoms are typical of classic Lyme disease, based upon the B. burgdorferi model, needs to be expanded to include the symptoms that are unique to the other strains of Borrelia, as their presentation can be quite different, as well as their vectors not being always a tick.

Treatments for B. burgdorferi, should be expanded to include the actual type or multiple types of Borrelia actually infecting a person. Although antibiotics, which can be likened to carpet-bombing, killing many bad bacteria, the Borrelia always causes the bad bacteria to mutate. This means the all types of bacteria lose some of their aspects that make it vulnerable to the antibiotics, not to mention the fact that antibiotics are notorious damaging to irreparably upset the populations of the friendly flora (microbiome) of the body, and cause prolonged and severe suffering through Jarische-Herxheimer reactions (Herx). A new Borrelia-phage-based targeted treatment has been developed that has been documented by repeated Phelix Borrelia-Phage testing, to rapidly eliminate only the types of Borrelia a person has been found positive, with no harm to the body, with minimal Herx reactions, and no harm to good bacteria.

The Phelix Borrelia-Phage test is the premier, newest, most sensitive Borrelia lab test available. The Phelix test is statistically the most accurate test, as each blood sample undergoes quadruplicate real-time PCR tests for 3 different targets (B. burgdorferi sl, B. miyamotoi, Relapsing fever) for a total of 12 assessments. All positive-like samples are submitted to confirmatory sequencing to rule out false positive results. Before the Phage real-time PCRs, each sample is submitted to 2 rounds of QC to rule out false-negative results that would relate to the technical flaws: (i) to assess the quality of extracted DNA by performing low cycles actin PCR, and (ii) to assess the absence of PCR inhibitors by doing a real-time PCR for IAC (internal amplification control).

Ongoing Development of INPT at the Biologix Center

INPT was developed by Phagen Corp. and is being used at the Biologix Center for Optimum Health, as a part of an IRB study, to go beyond Borrelia and target any microbial issue, including all of the co-infections associated with Lyme disease, as well as Candida sp., mold, and parasite infections, however at this time the only lab test for detecting bacteria-specific phages is for Borrelia strains.

The future of INPT includes intravenous and injectable forms of application, in addition to the oral medication, through doctors only. INPT is not projected to be sold directly to the public at this time.

If you would like to participate in our one to two week INPT programs please contact us at www.biologixcenter.com/get-treatment/. Financial assistance is available for those with chronic illness of any type, who desire treatment at Biologix Center and are struggling financially.

A more detailed report of these findings are presently being edited for publication in peer-reviewed article submission.

The Biologix Center is collaborating with researchers who are working to develop phage lab tests for Bartonella and other types of microbes. The Phelix Bartonella-Phage Test is hoped to be offered before the end of 2020. If you have been diagnosed with Bartonella and would like to contribute a blood sample for the development of this new test, please let us know. Offer available only to patients of the Biologix Center who have been pre-qualified by our testing.

To learn more about Bacteriophages and INPT please click on the hyperlink.

*INPT is a patent-pending innovation developed by Phagen Corp, and is being researched at the Biologix Center for Optimum Health, in Franklin, Tennessee. A patient-funded, Retrospective Registry IRB is in place to publish peer-reviewed articles as this clinical work progresses. Approximately 98% of funds go to support the ongoing research.

There are no financial or academic conflicts to be reported between Biologix Center for Optimum Health and RED Laboratories. 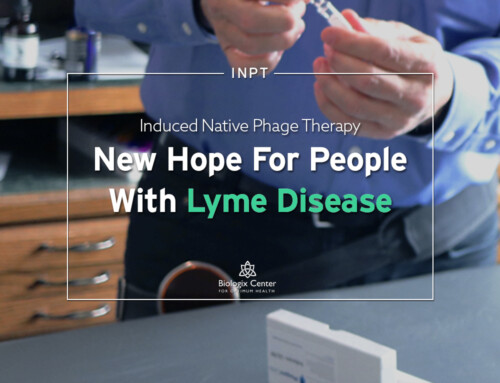 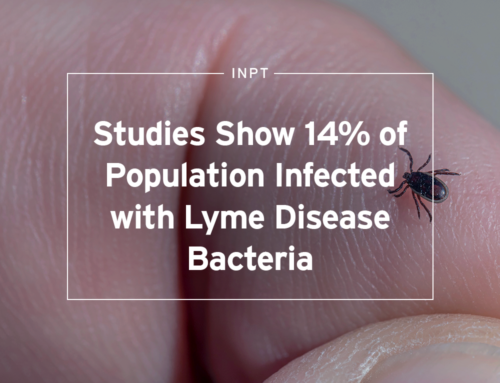