The Centers for Disease Control (CDC) states that in the U.S. alone, every 11 seconds a person gets an antibiotic-resistant infection, and every 15 minutes someone dies from one. In the last 10 years it is estimated that there have been 3 million new cases of the tick-borne disease generally called Lyme disease, which is most often actually multiple bacterial infections transmitted by the tick. Many, if not most of these infections are largely antibiotic-resistant, although new drug therapies, such as the latest, Disulfiram do show promise for some people. It is predictable however than drug therapies will always be limited in their effectiveness due to the ability of bacteria to eventually morph, changing their shape and function to avoid the drug. As a matter of fact, it has been shown by video microscopic observation that Lyme spirochetes are able to mutate within 15 seconds of the introduction of an antibiotic. One can only imagine the damage that the typical long-term antibiotic therapy is having on the body when it is often ineffective.

Renewed efforts to develop better treatments has led researchers to revisit Phage therapy. Like something out of a Mission Impossible movie, imagine viral assassins that you could send to seek out and kill every single one of the worst antibiotic-resistant bacteria in the body. Bacteriophages are these assassins. Bacteriophages, often called phages, are viruses that specifically and only target and kill just the bad bacteria, while leaving the body and friendly bacteria alone. One type of phage will kill one type of bacteria. If you want to learn more about phages the following link is a good video that shows how phages work, although it is featuring a different type of phage therapy.

Proponents of phage therapy tout several major advantages that phages have over antibiotics such as host-specificity, self-amplification, biofilm degradation, and low to no harm to human tissues. Researchers at the Eliava Institute of Bacteriophages in Tbilisi, Georgia found that the application of phages on in vitro colonies of the pathogen P. aeruginosa not only prevented additional biofilm formation by the pathogen but also dissolved existing biofilm. Phage treatments have eliminated biofilms formed by L. monocytogenes, P. aeruginosa, and Staphylococcus epidermidis on the surface of medical devices. These findings are highly relevant to the problem of persistent infections caused by implanted medical devices such as catheters, lenses, and prostheses where biofilm formation is common. This make strategic phage treatments especially appealing for infections that hide themselves, buried in thick biofilms, which render most treatments ineffective such as the spirochetes and coinfections that cause Borreliosis, or Lyme disease.

Whether a person is dealing with the many tick-borne diseases, such as Borrelia, Babesia, Bartonella, and Ehrlichia, the gut infections of H. Pylori and C. Diff, the lung infections of Strep, Pseudomonas, and even Staph infections, all of which are considered highly treatment-resistant, phages can dissolve the protective biofilms and selectively kill them more infinitely more efficiently than antibiotics.

Phage therapy is not new. It was first used in 1919 but was almost forgotten with the advent of the antibiotic age. Phage therapy saw a rapid resurrection in 2001. It is only recently however that it has regained serious interest in the scientific community, with the latest understanding of better ways to use phages.

A leader in this field of study is the Biologix Center for Optimum Health, in Franklin, Tennessee, an internationally renowned center known for its innovative testing and the treatment of the worst cases from around the world for the last 25 years. The doctors of the Biologix Center have been working since 2016 to develop practical, clinical methods to cause phages that already reside within the body to strategically go after the worst bacteria strains in your body. In a multi-prong approach, the clinical results appear to rapidly exceed any previous treatment results.

In an interview with David A. Jernigan, DNM, DC, the founder of the Biologix Center, it is clear that he is very optimistic, stating:

“In the same mindset that natural medicine has always worked to boost the immune system, we are now working to activate and boost the body’s own natural bacterial defense system…bacteriophages. Our degrees and field of study are uniquely ideal for this type of work, since we are debatably the only type of doctors who have always worked outside of the conventional drug therapy of chronic illness. Although I am not a great fan of the vague term, energy medicine, we are masters of the advanced scientific methods in this field.

Researchers such as Louis Teulieres, Ph.D., of the University of Leicester, in the United Kingdom, report that complex bacteria such as the Borrelia strains of Lyme disease have a unique genetic makeup that makes it difficult to diagnose. This uniqueness may also be why the immune system and antibiotic treatments cannot efficiently deal.

It is my idea that naturally occurring phages within the human body also have difficulty identifying these treatment-resistant bacteria. The chief idea being phages in your body can be energetically-induced to target specific problem bacteria. For whatever reason, these phages don’t always attack the bad infections in a person’s body until they are encouraged to do so. While happy patients are not considered scientific fact, in a conventional double-blinded research type of science, something I don’t find to be very ethical, since half of the patients are getting only a sham treatment, the early clinical results of our Induced Native Phage Treatment (INPT) seem to verify proof of concept beyond anything we have seen prior to doing this work. It is exciting for our patients to know that there is the very real possibility that the very bacteria infecting them can be given a deadly infection as well!”

Dr. Jernigan went on to say, “The results we are seeing are so shocking that I have a difficult time not proclaiming more than we can prove. Few labs in the world are doing work that could verify what we believe we are seeing in our patients, although we are in contact with a lab that may be able to help us. The impact of the future advancements from the world research initiatives in the effective use of phages to battle the world’s worst bacterial and fungal infections is staggering to consider in regard to relieving human suffering and ending premature death from infections. Imagine being able to safely and completely annihilate the world’s worst infections, without introducing known harmful medications, such as antibiotics, which also decimate a person’s friendly bacterial population, and cause often irreparable downstream metabolic side effects. When you consider that we are attempting to mobilize phages that already exist in your body, instead of putting new phage viruses into your body, the possibility of harm is extremely small. By using strategic frequencies we believe we are able to cause native, or phages that already exist in the patient’s body, to target and kill whatever infection we sent them to kill. It is as though an entirely new immune system has been discovered that we all have, yet it was not known how to turn it on in this way. This is not research in the classic sense. It is simply applying new clinical methods in an attempt to apply the latest understanding of how naturally occurring phages can and should keep harmful bacteria and fungi from killing us.”

The Biologix Center* is now accepting people who have exhausted all conventional and natural medicine who want to participate in this exciting new possibility as part of their intensive 1-3-week, all-inclusive treatment programs. 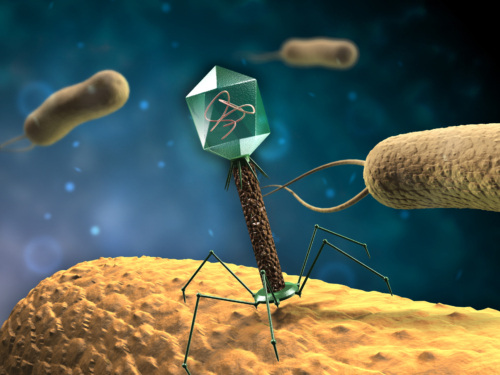 Phages are so numerous on the planet that if they were the size of ladybugs, they would completely cover the earth and be several miles deep. They kill up to 40% of all the bacteria in the world’s oceans every day, influencing marine oxygen production and perhaps even influence the earth’s climate. There are an estimated 50 million phages per milliliter of seawater. To put that into perspective, that would be 1.5 billion phages per fluid ounce of seawater.  From a planetary perspective as well as within the human body, the population seems to be that there are roughly ten phages for every one bacterium. Phages are found in the soil, water, air, plants, and animals, maintaining healthy microbial communities.

The focus of international researchers is to advance predictable results from hundreds of types of phages that are being banked, each that will kill only one type of problem bacteria.

Conventional Phage Medicine is using a nasal nebulizer to deliver the modified phages into their patients. Generally, they match a phage to a target location inside the bacteria or on the surface membrane of the bacteria with the idea that it will not kill all the target bacteria, but just the strongest of the target bacteria so that only weaker, slightly different target bacteria, are left, which the patient’s immune system or antibiotics can handle. The tactic is to chip away at all the harmful strains of disease-causing bacteria in your body.

The methods used at the Biologix Center are unique in that it is a multi-prong approach that seeks to continue to alter the energetic signal to the phage, almost like shifting the software programming of the phage, to enable the phages to kill the target bacteria as the bacteria morph in their effort to avoid the phage attack. At the same time, the doctor also is inducing the body’s normal immune system to specifically target that same bacteria, while essentially souring the milk, changing the internal environment of the body to one that is less conducive to the bacteria, using combination therapies, such as Mild Hyperbaric Oxygen therapy, and broad-spectrum Infrared Sauna therapy to change the internal environment in order to enhance the phage activation and effectiveness. The doctors expect that as the worst type of bacteria population decreases then the next worst one will need to be addressed, and so on until health is achieved.

Phages are very sensitive to their environment, i.e., body temperature and pH. It is known that a small amount of antibacterial substances can promote the activation of phages (induced) to attack bacteria, which is also known as a prophage therapy, that can enter the active phase rapidly when the circumstances demand it, such as when problem bacteria begin to struggle under the strain of treatments.

Research shows that predictably the bacteria morph, altering their shape in order to survive, so different phages are used that are known to attach to new target areas of the bacteria:

The company Adaptive Phage Therapy (APT) is a publicly-traded company with some interesting info that is worth reading on their website:http://www.aphage.com/the-science/ APT states, “It is now known that a single phage strain can generally infect only a single bacterial strain. Thus, in contrast to antibiotics which are effective against many different organisms, a purified phage strain is limited, but highly effective, against the strain of bacteria it can lyse. If bacterial resistance emerges in response to the initial phage administration, APT is able to rapidly identify a new phage that is effective against the mutated strain. This process can be continued until the bacterial infection is cured. No conventional antibiotics can be developed to deal with bacterial resistance with such rapidity.”

It is thought that phages kill bad bacteria only, leaving helpful bacteria alone. Phages are self-limiting as their populations decrease or fade back into the microbiome background, as the target bacterial population dies off.

*The Biologix Center for Optimum Health makes no claims of using conventionally recognized phage treatments. All treatment efforts are made to induce naturally occurring phages in the body to become activated against infections. At this point in the science, there is no way to test the validity of these treatments other than the retrospective improvement or lack thereof of the individual. Please refer to biologixcenter.com for more information on their philosophy of care.